Home Home Power About Us

The Poncelet Wheel, pictured above, offers a curved bucket with its lip angled tangentially to eliminate the impact of water to near zero. Developed in 1824, this design flourished for over 10 years. Now forgotten for more than a century, this ingenious design, more than any other, pointed the way to the great changes in "water engines" that were to occur in the late 1800’s.

The Poncelet was a graceful, efficient, undershot wheel, unlike any other before it. Now, the Poncelet wheel usually receives but slight mention in modern engineering textbooks, often only a short paragraph with few details. It deserves much more, for it was the first wheel designed to meet the advanced principles of hydraulic physics, thus setting a precedent for all later developers of waterpower.

It is important to understand the environment in which Jean Victor Poncelet developed his unique design. In the 1820’s Britain and Europe were in the midst of the great industrial revolution. The steam engine was a generation away from taking the leading role in powering industry in France. There was scarcely a good hydro site in England or Europe that had not been harnessed. Many of the streams had mills so crowded together that one could travel for long distances without getting out of sight of a water wheel. Every inch of head was precious, and every gallon of flow was treasured. The government of France and others offered large prizes and great honors to designers of more efficient water wheels. Many of the best minds of the day were engaged in seeking additional energy for their burgeoning industry.

It was estimated that there were more 60,000 operating water wheels in France in the mid-1820’s. Many of the streams in the industrial areas of France were located in rather flat topography. Jean V. Poncelet studied the widely used undershot wheel, the least efficient of all water wheels, and developed a new design that more than doubled its efficiency. His new design met with instant success. The mill operators were well acquainted with the limitations of their old undershot wheels and immediately recognized the superiority of the Poncelet design. Several manufacturers erected new wheels of Poncelet's design immediately, without waiting for years of testing by others. The French Academy of Science awarded Poncelet its 'Prix de Mecanique'. In the next few years, many other Poncelet wheels were installed chiefly in France and Germany.

What made the new Poncelet design so much more efficient than the previous designs? How did this new wheel extract more than double the power from the same stream? The older undershot wheels presented a flat blade for the incoming water to impact. Part of energy from this impact became heat, a totally unnecessary byproduct in a water wheel. Also, the rim speed of the old wheels was equal to one-half of the velocity of the incoming water; therefore, they only slowed the water movement by half, allowing half of the velocity to pass through unchecked. These losses resulted in most of the old undershot wheels developing less than 30% efficiency.

The Poncelet design, on the other hand, presented a curved blade with its lip angled tangentially to the incoming water so as to eliminate the impact to near zero. The blades of this new wheel also receded before the incoming water at one half of its velocity. In the Poncelet wheel, the water climbed up the curved incline, cresting about the top of the blade after entry and receding to the lip in another 15-degree devoid of practically all of its forward momentum thus transferring substantially all of its energy to the wheel. The water was held in the wheel by a breastwork extending 15' each side of bottom dead center. This gave the Poncelet a potential efficiency of 100%, with an actual realized efficiency of 60% to 70%.

As an example, a 16-foot diameter Poncelet wheel operating on a 4-foot head receives the water at a velocity of 16 feet per second. In 1/2 of a second and in 4 feet of travel, it substantially stops the water without impact and simply drops it in the tailrace devoid of its forward velocity. This was the first design in which the flow of water within the wheel was considered important. A correctly timed Poncelet wheel is a graceful and efficient machine. It will work as well today as it did in the 1820s and 1830s. It is probably the best wheel to employ on heads of 6 feet or less, particularly where the flow rate is subject to wide variations during a cycle of seasons. On wide streams where the head will vary but little, this wheel can be made to accommodate a 300% to 400% variation in flow rate with little effect on its efficiency. If one has a hydro site with as little as 2 feet of head and with a sufficient flow of water, a Poncelet designed for this combination may be the most practical wheel available.

Why were they all but forgotten after 1850? Close observation will reveal that what one has in the Poncelet design is a large turbine. Note its close blade resemblance to the everyday common water pump we have today. 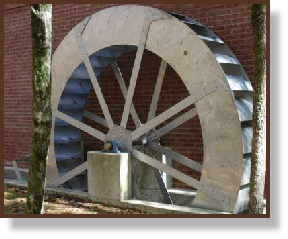 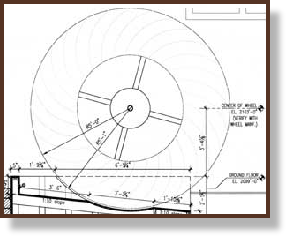 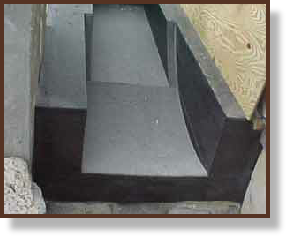 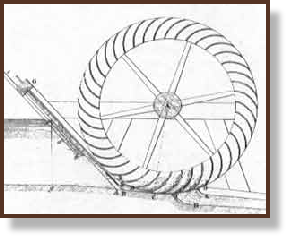